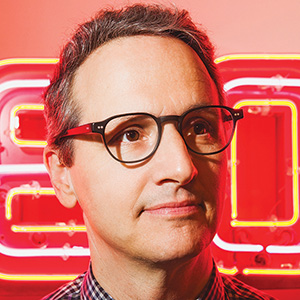 Quinn is the CEO and Founder of distribution label NEON, which continues to push the boundaries and take creative risks on bold content with films such as: BORDER, Sweden’s pick for best foreign film which recently garnered an Academy Award® nomination; Todd Douglas Miller’s cinematic event 50 years in the making: APOLLO 11; Tim Wardle's THREE IDENTICAL STRANGERS, winner of the Sundance Special Jury Award for Storytelling which surpassed $13m at the box office; and Bong Joon-Ho’s highly-anticipated crime drama PARASITE, premiering in competition at Cannes.

Social Impact has been fundamental to Quinn and NEON from the beginning, in their commitment to visionary filmmakers with strong points of view and films that engage with and reflect our culture and bring audiences into a shared conversation. NEON recently partnered with Impact Partners and Artemis Rising on an effort to bring THE BIGGEST LITTLE FARM to schools and communities nationwide through their in-theater education program. The inspirational tale of leaving the big city to farm in harmony with nature opened in theaters on May 10th. The company will next partner with Participant Media on the survival thriller MONOS which will be released on Sept. 13th and collaborated with Refinery 29 and Planned Parenthood on LITTLE WOODS starring Tessa Thompson which was released on April 19th.

2018 was a record-breaking year for NEON, with the release of Craig Gillespie’s runaway hit I, TONYA starring Margot Robbie and the Academy Award® winner for best supporting actress, Allison Janney, as well as Matt Spicer's Sundance and Independent Spirit Award-Winner INGRID GOES WEST. After their successful collaboration on I, TONYA in January 2018, 30WEST (Dan Friedkin's and Micah Green's strategic venture) partnered with NEON's Tom Quinn and Tim League (Co-Founder) to become majority investors in the company.

Quinn is credited with having created a new distribution paradigm for such groundbreaking films as SNOWPIERCER, IT FOLLOWS and BACHELORETTE, while simultaneously championing a traditional distribution model for recent back-to-back Oscar winners 20 FEET FROM STARDOM and CITIZENFOUR. Having acquired, produced and distributed over 200 films spanning a 20-year career, Quinn is responsible for launching 2 distribution labels: the boutique label RADiUS and the groundbreaking genre label Magnet for Mark Cuban and Todd Wagner. He also played a key role in pioneering the use of VOD platforms as the Senior Vice President at Magnolia Pictures, and served as the VP of Acquisitions at Samuel Goldwyn where he was responsible for SUPER SIZE ME.

Quinn is the recipient of the Visionary Award alongside Eli Roth and Elijah Wood from the Stanley Film Festival, and the Leading Light Award from the DOC-NYC Film Festival.